10 Baby Gear Products That Helped Me Maintain My Sanity

The combined responsibilities of working at a demanding full-time job, taking care of an adorable 5-month-old baby boy, and maintaining some sort of relationship with my cutie-pie husband has kicked me in the butt. Those first couple of months especially were just a blur of emotions, feedings, diapers, and tears (both the baby’s and mine).

But I did manage to learn a few things along the way. Mostly I learned that I had a lot to learn. I also learned that the right product at the right time could be a lifeline to a new mommy.  So in an effort to help other new moms maintain a semblance of sanity, here’s a handy-dandy list of some of my favorite products.

Just keep in mind that you and I may have different definitions of sanity. If your version of sanity doesn’t include anti-depressants and large amounts of sushi, you may want to take the following advice with a grain of salt.

Also – I’m not giving any brand names (for the most part) because nobody is paying me for the tens of seconds it takes to do a Google search and copy a link. 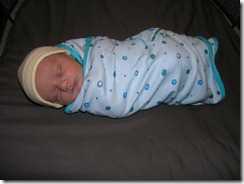 My little one loved to be swaddled. Babies have a startle reflex that causes them to throw out their little arms and legs, and swaddling keeps them from waking up from it (says Pseudo-Dr. Leslie). My baby book had diagrams and instructions for the proper swaddling of a newborn, but there isn’t a book in the world that could teach the intricacies of swaddling to this engineer. The nurses in the hospital were all “look how good I am at swaddling with a plain old blanket,” but I was all “don’t make me do anything complicated when I’m functioning on only ten minutes of sleep and a diet coke.” So this swaddle blanket with Velcro closures was just what I needed.

I never even knew these things existed until my baby shower, but I ended up loving it. We were able to keep baby Michael swaddled in his car seat, and even when we stopped swaddling him we kept using it to keep him warm when we were out and about. Because those trips to and from the pediatrician in August in Houston in an SUV with a broken rear air conditioner get mighty chilly. 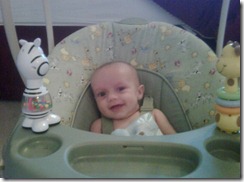 If you’re a research maven and bookworm like I am, you’ll come across the line of thinking that you shouldn’t put your baby to sleep in a swing because then it will be difficult to get them to fall asleep in their cribs. I’m sure some very Smart People came up with that thought, and it made a lot of sense when I first read it, but then I realized that those Smart People are able to write books because they’re not sleep-deprived from dealing with a screaming baby. So until those Smart People come to my house to babysit for me, any baby that lives in this house will have 24×7 access to a swing.

We kept the first swing upstairs in our bedroom, making it possible for me to shower and even answer Nature’s call every now and then. Fortunately for me, I didn’t have to answer Nature’s call very often because I didn’t usually see a meal until sometime in the afternoon. It was just too difficult to eat a bowl of cereal or even make toast while holding a newborn.

It was a full six weeks (maybe more), before it occurred to us to get a swing to keep downstairs in the kitchen. Because Smart People don’t live in this house, no matter what those college diplomas say. They don’t teach common sense at the university. But we did eventually figure out that another swing might be a good idea. And it CHANGED OUR LIVES. The air smelled sweeter. The birds sang more sweetly. And Nature put me on speed dial. 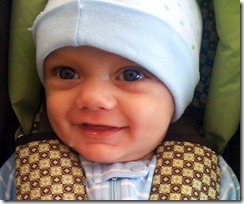 Formula isn’t typically listed as baby gear, but I felt that I should include this for all those nursing mothers out there that live by the mantra, “The br**st is best.” I, too, spent the first month of Michael’s life as a Nursing Nazi (“No formula for you!”), until I realized that maybe his constant crying was because he was a wee bit hungry. So we began supplementing with formula and ended up with a very happy baby. I thought that I would feel guilty giving Michael formula, but, honestly, I was so exhausted from the constant feedings that I couldn’t make the formula fast enough. Got milk? That’s great. But a bottle or two (or three or four) of formula a day won’t cause irreparable harm. 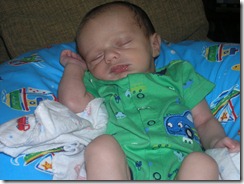 I’m considering writing the Boppy company and suggesting that they create some sort of backpack/harness thingy to use to carry the Boppy because I didn’t go anywhere without it the first couple of months. I used it for nursing, cuddling, bottle feeding, and baby naps. I now occasionally use it to help Michael sit up. Oh, it is a wondrous thing.

One of the scariest things that I’ve ever done is pull a tiny T-shirt over my son’s soft-spot-ridden head and around his baby bird neck. Who needs that kind of stress after pushing a watermelon through a pin-hole? We waited until Michael’s umbilical cord stump fell off before putting him in zippered PJ’s, but considering it was almost a month before that happened, the next baby will probably end up being zipped up long before then.

It’s a bassinet! No, it’s a changing table! No, it’s a play pen! But wait, it’s all of the above! That’s some serious bang for your buck. Or, in my case, for my brother’s buck since he’s the one that bought it. But you get my drift. (Does anybody say that anymore? Besides thirty-something women that are seriously out of touch with what the young people say these days?) It won’t work for a small bedroom because it’s actually pretty large (large as in “look how big it is”, not large as in “large and in charge” or “livin’ large” or any other out-dated phrase). But if you have the room for it, it may be a better choice than a bassinet that you’ll use for only a couple of months before wrestling it into the attic. 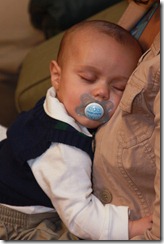 I love my boy. I really do. But cleaning his paci fifty times a day after he has spit it out (with some force, I might add) is one of the more tedious chores of motherhood. It’s even more frustrating when out and about. I do have those little clip thingies to attach a paci to his clothes or car seat or whatever, but I have a fear that the ribbon keeping the paci from touching the floor will wrap around his sweet wrist and cut off the circulation (because looking for reasons to be anxious has become quite the hobby). The Paci wipes are great because I can just whip them out of the diaper bag and clean off the mute button paci without having to find a faucet.

Or, as we like to call them, drop cloths. I just love cuddling with my little one, looking into his big blue eyes while he gives me that gorgeous gummy grin, thinking about what a privileged mommy I am to have such a beautiful/sweet/darling/smart baby boy. But, just as often as not, my beautiful baby boy’s gummy grin becomes the Fount of Many Feedings. So we’ve learned to lay him on a blanket whenever we can. It’s much easier and cheaper to throw a blanket into the wash than to take a comforter to the cleaner’s.

Well, there you have it. You’re probably impressed, irritated, or confused by my many words. If you’re impressed, I can safely say that you’re sleep-deprived. If you’re irritated, you must be one of those Smart People. But if you’re confused…Congratulations, you’re a mommy.