A Day in the Life – Edition “We All Need Claritin”

7:30ish am – I wake up when Garrett brings the boys into our room and plops Cruz onto the bed next to me. I’d had a rough night due to allergies and congestion (which is affecting us all), so I hadn’t slept well. Hadn’t even heard the boys wake up. I stay in bed a while longer while the boys watch Curious George and fight over the remote next to my congestion-filled and near-lifeless body.

7:45ish am – I finally drag myself out of bed and give the boys oatmeal and apple juice for breakfast. Mama has a strong cup of coffee with her oatmeal. I get myself and the boys dressed, but it’s slow-going since I’m just. so. tired.

8:45ish am – We’re out the door (with my leftover coffee in a travel mug) and headed to take Michael to preschool. I put some quick makeup on in the car in a futile attempt to look more put-together. I drop Michael off at school (late!) and go run errands at Hobby Lobby and Target with Cruz. I intend to buy groceries at Target, but realize that the back of my SUV is filled with strollers and stuff, so instead just get some gifts and necessities. I also pick up lunchables for the kids to make lunch easy today, and buy myself a ready-made sandwich to eat in the car and save myself some time.

Noon – I pick up Michael and head home. He’d made an alien face in school, and he’s super proud of it. We get home and I get the boys and Target bags into the house. Cruz rips one of the eyes off of the alien face pretty much as soon as we get home. Michael has to hold the eye in place for the picture because I’ve got too much going on to stop and locate the glue. 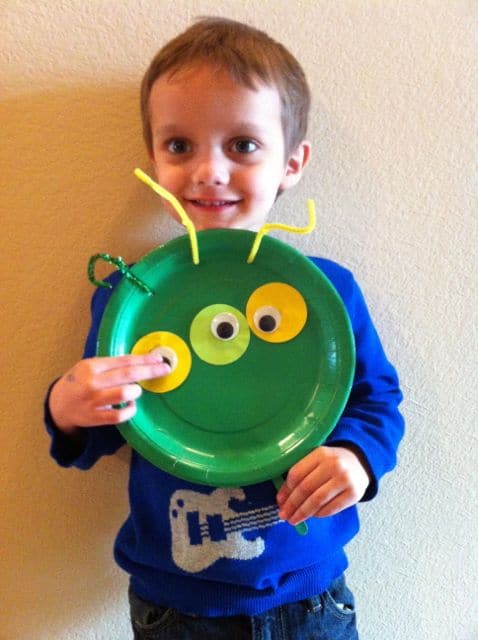 12:30ish pm – I change Cruz’s diaper and get them their lunch while they watch more Curious George. 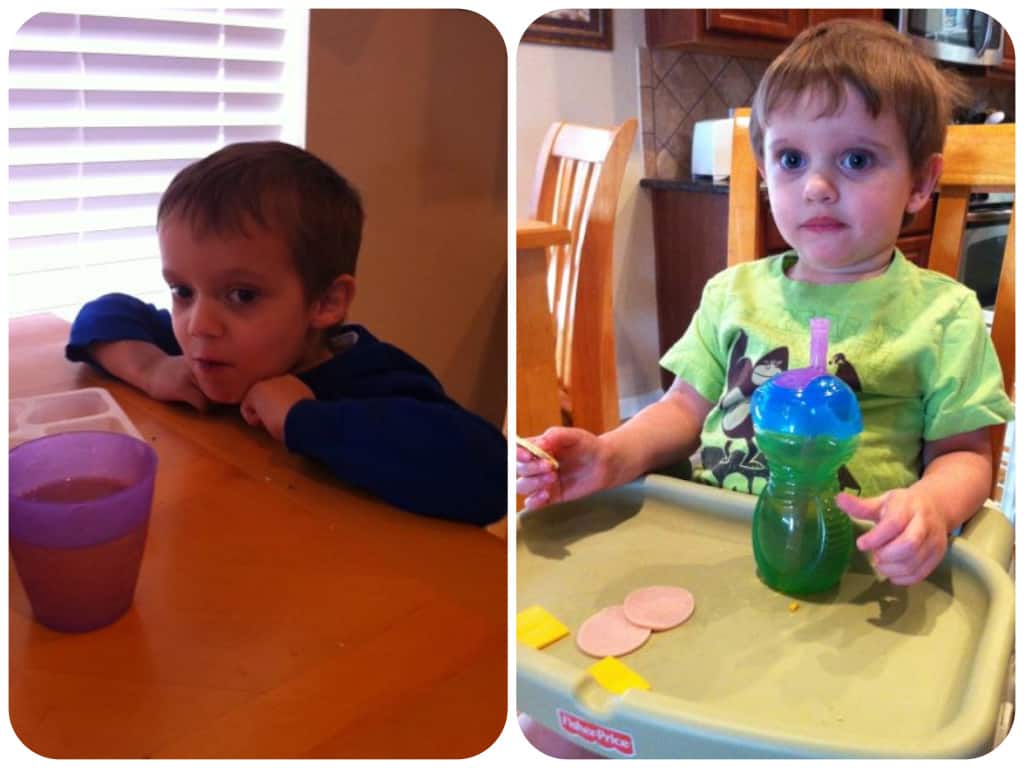 I look at these pictures and think, “Wow, Cruz needs a haircut.” So I put “make appointments for haircuts” on my mental to-do list. After the boys finish their lunches, I pull out a couple of things that I bought for them at Target.

Sidenote: I hardly ever get them a toy when I go shopping because that’s what birthdays and Christmas are for. But I saw a Melissa and Doug educational activity that I knew Michael would enjoy, and he’s been asking for more “games” (educational activities) lately, so I got it and a little something for Cruz, too. 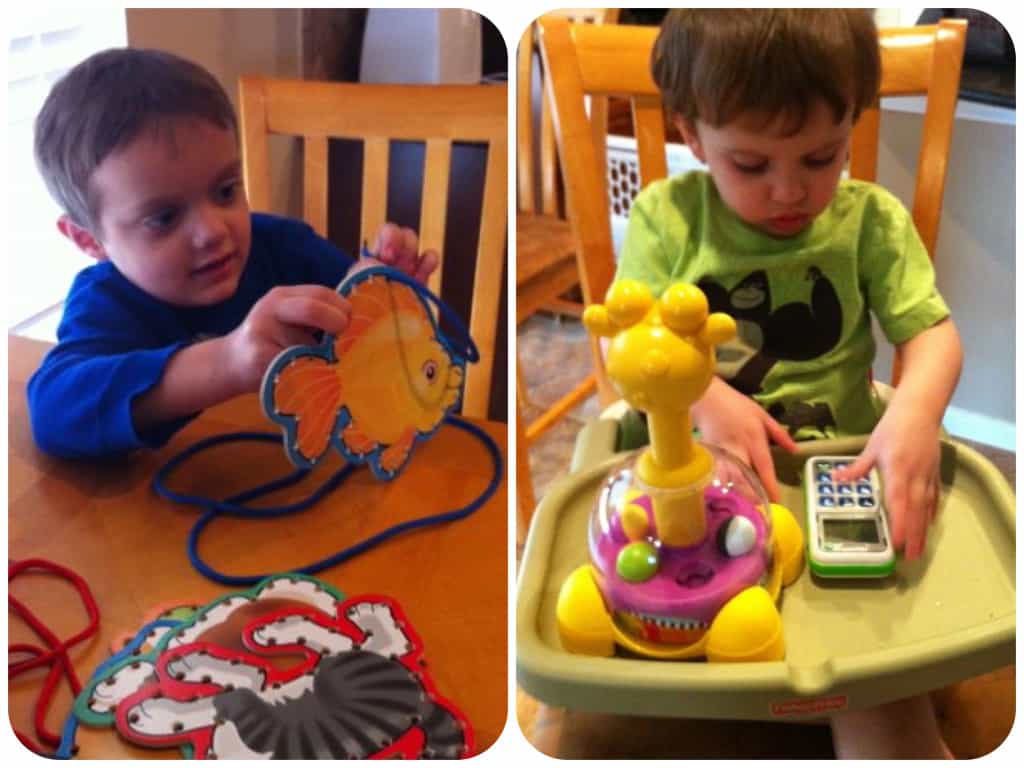 While Michael and Cruz are eating lunch and playing with their new toys, I put away my Target purchases, unload the dishwasher, wash dirty dishes from breakfast, start a load of laundry, and fold yesterday’s load of towels. I also finally get around to making the bed. Garrett and I both appreciate a made bed, so I usually do that in the morning, but this morning was too rushed for all that. Michael must also appreciate a made bed because he has started making his own bed lately, hallelujah.

1:45ish pm – Time for quiet time, and I need it! I turn out the lights and sit on the couch to rest a little. I give Michael his Nabi to play with. I let Cruz run around to play since he’s been in the car seat and shopping carts all morning. I’m hoping that he’ll eventually settle down for a nap, but he slept in the car so I know not to push it. I plan to let the kids watch more Curious George, but Cruz has recently become tall enough to turn off the TV, which he does, repeatedly. Fine, no TV.

I spend a minute thinking about the fact that Michael usually refers to himself in the third person – “Michael got booboo.” “Michael wants crackers.” I have an irrational fear that he’ll turn into Jimmy from Seinfeld – “Jimmy is pretty sweet on you.” “Jimmy’s got some new moves.” “Jimmy holds grudges!”

I check my email and  find out that I won a giveaway on Antique Mommy’s blog! Yay!!! I think we’re going to put the gift certificate toward a sign of Maddox house rules – once we come up with them.

I spend the rest of the afternoon doing more online stuff, playing with the kids, disciplining, and generally keeping my precious boys from injuring themselves.

Cruz never settles down. He spends much of the afternoon walking around wearing one of Michael’s shoes. On the wrong foot. 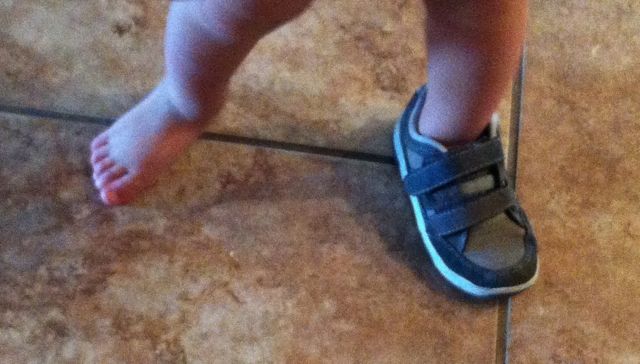 5 pm – I make dinner and feed the kids. And by “make dinner” I mean that I reheat some leftover peas from yesterday and put a frozen casserole in the microwave. It’s one of those casseroles that you can put in the oven, which I usually do to pretend like I’m actually cooking. But we’re all cranky and tired, so I don’t feel like waiting on it. Cruz decides that he hates the casserole, so I make him PB&J. I then enjoy some whining and spilled juice.

Sidenote: I don’t always make frozen casseroles. Sometimes I crockpot it or heat up something from a can. If I’m really feeling fancy, I make arroz con pollo (chicken and rice). I freely admit that I’m no Julia Child.

5:45ish pm – After cleaning up, I’m so tired that I could just lay on the floor. I feel like Loretta Lynn in Coal Miner’s Daughter when she tells Doo, after a long day of chores and kids, something like she’s so tired she could die. That’s how I feel, like Loretta Lynn. Only without the potential of making millions from a song born from my exhaustion. And I don’t even have Garrett to complain to (yet) since he went to a networking meeting tonight. So I pretty much just sit on the couch and think about how exhausted I am, perioidically getting up to keep one of my precious children from hurting himself.

6:45ish pm – Garrett gets home. YAY!!! He changes and eats the dinner I put aside for him while we chat about the day. And yes, there was some complaining, which I’m sure Garrett loved.

7:15 pm – Garrett changes Cruz into his PJ’s, and we give him the Claritin the doctor recommended to help with the snotfest going on. Cruz is exhausted and cranky because he refused a proper nap, so he promptly falls asleep in my arms (heaven!) after drinking his nightly sippy cup of milk.

7:30 pm – Now it’s time for Michael to go to bed. Garrett changes him into his PJ’s and goes through his High Five (Highlights) magazine with him in lieu of a bedtime story.

8 pm – After finishing an episode of the British version of Antiques Roadshow and wishing that I had just one antique that I could sell and make a killing, I get off the couch to get my shower and relax for the evening (besides writing this post). I really hope I can sleep tonight because I need it.

Linking up with Kelly’s Korner.