A Mother Is a Warrior

My little one spent four days at Texas Children’s Hospital. It’s a wonderful hospital with special people working to bring children back to health. But I hope to never return.

Our stay began two Fridays ago (Valentine’s weekend) after a trip to the ER. Michael had been cranky that week, not wanting to be put down. That was highly unusual for my active baby boy, so I was not surprised when he developed a fever. We took him to see his pediatrician two days in a row, but Michael’s illness was dismissed initially as teething, then, after some swelling in his eye, as a virus.

I wanted to believe the doctors and tried to dismiss my feelings of dread as the anxiety of a first-time mother. I also didn’t want negative things written in my son’s chart, because who knows what goes in there? What if he really got sick one day but I wasn’t taken seriously because I was demeed as uncooperative in an earlier visit? I just wanted to be nice and have a good relationship with everyone at the pediatric clinic.

But on the third day, Michael’s eye swelled completely shut. I could barely see the tips of his long lashes. I called the pediatric office to have someone tell me what to do, since they clearly hadn’t thought it was a big deal. I tried not to panic and waited for a nurse to call me back. My heart fell just a little once I talked to her because her tone of voice suggested a distracted worker that felt bothered by a needlessly anxious mother. She said she’d have to talk to the doctor.

After waiting for about 45 minutes, I let go of any desire to be “nice.” I was exhausted from lack of sleep due to my sick baby, and just plain irritated that my concerns had been belittled all week. I’d tried to keep my cool and be nice to everyone, but I felt that being “nice” to strangers was being unkind to my son. So I called the doctor’s office again and demanded to speak to a nurse because my son was rapidly getting worse and I needed to know if it was serious. After waiting another half hour, we left for the ER.

The nurse finally called back as we were on our way. I told her thanks, but no thanks, we’d decided to go to the ER. The nurse was beyond irritated with me at this point and showed it when she said that the doctor had just told her that he would need to see “her” again. Because there are a lot of “hers” named Michael. (Yes, there are some, but it’s not the norm.)

This was the last straw for me. After giving Michael’s information three times, the nurse still hadn’t taken a good look (if any) at Michael’s chart. She probably hadn’t seen that we’d been to their clinic the previous two days and was clearly bothered by this woman on the phone demanding her attention.

(Here’s where I have to say that I understand irritated callers. I had a job many years ago where I had to take calls from customers having trouble with their computer systems. If they had to call about a problem, they were already in a bad mood. I expected it and just talked them through it.)

Back to our story…I received no sympathy or empathy from the nurse. I asked if the doctor would be able to see Michael right away. I will never forget her tone of voice as she said that “she” would have to wait for more than an hour. It took every ounce of civility in me to say that we would just go to the ER. But it wasn’t enough because the nurse hung up on me.

So I pushed aside thoughts of our FORMER pediatrician and focused on the ER. After a CT scan, the doctor found what appeared to be an abscess in Michael’s right eye socket, which told him that there was an infection around the eye. They take that sort of thing very seriously because there’s a danger that the eye would become infected, too, requiring surgery and a possible loss of vision. 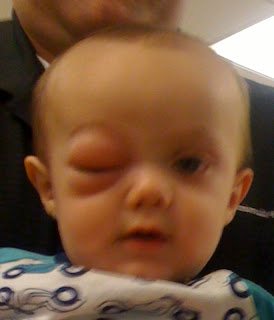 So they put an IV in (awful experience, just imagine your baby screaming in fear and pain and knowing that it had to be done) to give him antibiotics intravenously and sent us to TCH in an ambulance. 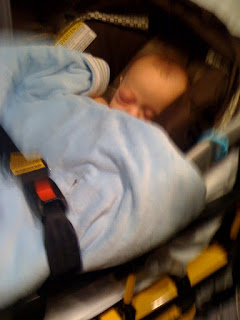 I cried as Michael got the IV. And I cried as his car seat was strapped to the gurney for the trip to TCH. I was scared for my little one and wondering if there was something that the doctor wasn’t telling us. At TCH we were told that Michael would be in the hospital for at least five days, so I knew that it would be an exhausting week. I was already running on empty and didn’t know where I would find the strength for the coming week. I was afraid that I would finally pass out from exhaustion and not be able to wake when my baby needed me.

My brother-in-law’s wife is a nurse at TCH and lives close by, so she met us in the ER with my mother-in-law, bearing food and Tylenol (for me). She helped us know what to expect and smoothed the way for us, which we so appreciated. The next four days were rough for me and Garrett, but Michael’s fever came under control and the swelling in his eye went down. We were so happy to see both of his big beautiful blue eyes (I love alliteration). 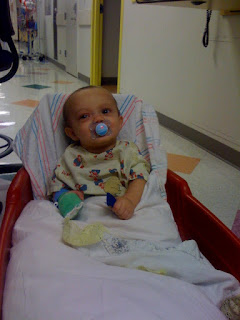 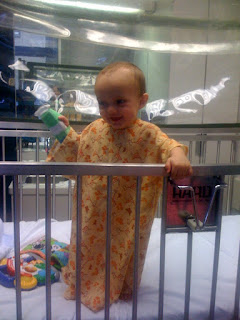 We were discharged from the hospital early and sent home to give Michael oral antibiotics. We also have to irrigate his nose twice a day (think of a neti pot from h-e-double hockey sticks). Not fun, but we’ve learned that Michael won’t always be happy about decisions we make concerning him. He won’t always understand that sometimes we have to allow something unpleasant in his life to protect him from something worse.

That was a lesson I needed, in more ways than one. Sometimes I’ve had my feelings hurt when it seemed like God wasn’t paying attention to me during difficult times. I won’t know on this side of eternity how many ways He protected me while I pouted over hurt feelings.

I also learned that I can’t value “niceness” over “kindness.” It’s not necessarily nice to hold my son still so that my husband can irrigate his nose. And it sure didn’t seem nice to allow nurses to work at getting another IV into his tiny veins. But it was the kind thing to do and protected him from further illness.

So let the world be warned: I will not allow the expectation of “niceness,” of wanting people to like me, to control me and dictate my actions, especially concerning my son. God formed my little one in my womb, giving me a divine appointment as Michael’s mother. Being a mother is not for the faint of heart and sometimes requires fierceness. As a mother, I’m a warrior, fighting for the best for my child. I desire wonderful relationships with everyone that I come in contact with, but I will not allow “niceness” to edge out kindness in regards to my family.

Look at this face. Home from the hospital and happy to see his toys. Who wouldn’t be kind to him? But those who aren’t better watch out…there’s a warrior assigned to him. 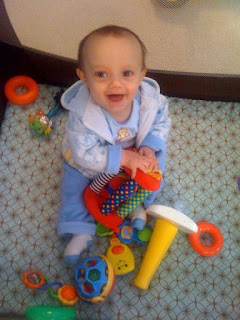 6 thoughts on “A Mother Is a Warrior”