Coming to terms with the fact that not everyone loves my boy the way I do.

In a previous post, I described how I came to the conclusion that mothers are warriors, the best advocates for their children. I wrote that post mostly for myself, to work through my feelings after feeling like I had to fight to get my child appropriate medical care. I hope to never forget that lesson.

Then, a couple of weeks ago, I left my cherub with my mother and went to a little European bakery to sip coffee and try to catch up in the Beth Moore study I’m doing. And yes, I know I’m supposed to do a lesson a day and not pack a few lessons into one day, but what can I say, I’m doing what I can. Anyway, I think I was in week 4. Not sure and too lazy to go look it up. Beth (Miss Beth? Mrs. Moore?) talks about how we sometimes want to retaliate against people that hurt our children, but that retaliation is never ok. It was a good lesson and something worth thinking about.

So of course I looked back at our little medical drama and asked myself, “Self, was I out of line in the Maddox Medical Mania of 2010?” After some thought, I answered myself, “No, you were advocating for your child appropriately in what could have turned into a dangerous situation for him – surgery and maybe even loss of vision.” And then I wondered what situation might arise that would tempt me to retaliate.

Just days later, we left our 8-month-old little monkey in the care of people that we should have been able to trust. It never crossed my mind that it would not be a good child care situation for Michael because hundreds of people trust that organization to give the best (or at least very decent) child care every week.

We started questioning the care Michael received when we picked him up. One of the child care workers behaved so badly in front of us that we wondered what happened when we weren’t there. Michael was whimpering in a way that I don’t think I’d ever seen, and the other child care worker seemed weirded out.

I thought maybe I was just being an overprotective mother, but on the way home my husband told me that he had seen some of the same things. My husband isn’t the overprotective type, so this confirmation of my concerns set me off. The more I thought about it, the more upset I got. In the immortal words of Claire Huxtable, I wasn’t just angry – I was MAD.

I was mad at the possibility of what might have happened. But I was also mad at myself for almost falling into the trap, yet again, of choosing to be nice and ignore warning signs rather than face reality and do something about it. And I was mad that people…bullies…use our niceness against us, count on it, even, to be able to continue in their behaviors.

I emailed Someone In Charge and described what we saw of the situation. I told her that I didn’t know if there was need for concern or not, so to please speak to the other child care worker in the room and let me know. They did look into it, but I never got a definitive response, which pretty much told me everything that I needed to know. I’ve had a couple of conversations with the Someone In Charge, and I really am confident that they are taking care of the situation in a way that’s respectful to everyone involved. They’ve provided us with another child care option, but at this point we have such a bad taste in our mouths over the whole thing that we’re not comfortable leaving our non-verbal child there again. So we probably won’t be back.

Things didn’t turn out the way I’d hoped, but it could have been so much worse. Let me be clear in saying that there was no physical abuse. (At least I don’t think so. We still don’t have all the facts.) But there was a lot of anger in that room when we walked in, as well as rough treatment that we witnessed. I was tempted to retaliate like never before. I wanted to march back in that room and demand an explanation for what had happened. Or to someone’s, anyone’s, office and demand to know why they had someone caring for babies that didn’t seem like a good fit for the job. I wanted to tell the ten people reading this blog to keep their babies away from there. And I really wanted to write a Nasty Email to the Someone In Charge when the whole thing started.

But I didn’t. Beth Moore’s admonition that retaliation is never ok, even when it comes to your children, rang in my ears. So I did my best to stick to the facts and remain unemotional in every email and conversation. Although I’m not completely happy with how things turned out, at least I don’t have to deal with the grief of regretting my behavior.

Now I’ll close with a question: How could anyone treat my beautiful boy unkindly? Look at that face. Isn’t he just precious? JUST PRECIOUS. Oh, how I love that kid. 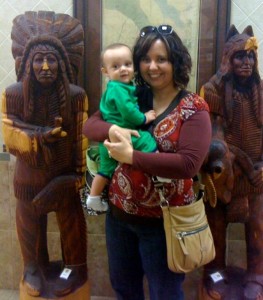 (We took this picture at Buccee’s a couple of weeks ago. Are those price tags on the statues? I can’t imagine buying such a thing. )

2 thoughts on “Coming to terms with the fact that not everyone loves my boy the way I do.”