Emptying my brain before falling asleep

It’s 2am, and my brain has officially slowed to a crawl. I’m listening to the rustle of my little one moving around in his crib. I say “rustle,” but I really mean “the slightest noise amplified unnaturally by a baby monitor made for worriers like me.” Shhhhh….he’s still now. Oh blessed sleep.

I should be asleep too, because if history has taught me anything it’s that I’ll be listening to a crying baby in about three hours. Then we’ll have our first cuddle of the day as I consider that I’m such a privileged mommy to have such a wonderful baby boy.

So I should be in la-la land right now, dreaming about poopy diapers or that annoying little song that the Jumperoo plays over and over and over again, punctuated by elephant and monkey sounds. But a tornado watch flashed up on the TV screen a few hours ago, and I immediately went to red alert.

Actually, I first tried to figure out which is worse, a tornado warning or a tornado watch? I always get those confused. Because a warning could mean, “Hey, I’m warning you that a tornado, it’s a-coming!” But a watch could mean, “I’m watching a tornado right now! Run for your lives!” And then I thought, “Whatever! I see the word ‘tornado’ and that can’t be good!”

So once my internal red alert was established, I pictured myself hearing the wind pick up and running to Michael’s room to swoop him up in a motherly football hold in preparation to fly down to the closet under the stairs, kicking the dog and cats out of my way, and screaming for Garrett to follow me. Because I’m thoughtful like that.

Understandably, that mental state was not conducive to sleep. A panic attack…yes. Slumber…not so much.

I decided to stay awake for a while longer and see how this whole tornado situation panned out. It reminded me of the first few nights that we had Michael home. He was so teeny tiny in the bassinet. More often that not, I slept at the foot of the bed so that I could rest my hand on his chest and make sure he was still breathing. 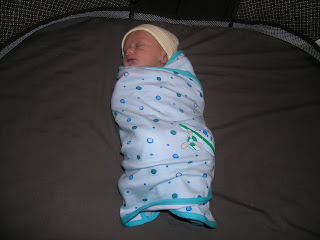 I remember thinking that I wanted to just stay awake and watch over him, knowing that it was impossible to sustain that level of watchfulness for long. I was so frustrated with the limitations of my humanity. But almost immediately I remembered that God “will neither slumber nor sleep.” And it hit home like never before that nothing catches Him by surprise.

Oh boy, was I relieved. I still watch over Michael, and have even sat in the rocking chair in his room a time or two while he slept. But rather than watching and fretting, I watch and ponder. I ponder the turn my life has taken the last few years, the fulfilled dreams of a loving husband and beautiful child, and the knowledge that I can go to my own room to sleep and leave Michael in better hands.

Speaking of sleep, it’s now 2:45am and I need to sleep while I can! Here’s to hoping that my dreams involve something other than diapers and baby toys.

PrevPrevious10 Baby Gear Products That Helped Me Maintain My Sanity
NextBy the way, I’m not fishing for a complimentNext