My first week as a SAHM was TOUGH!

We started off the week with Michael having a temperature of 102, so we took a trip to the pediatrician on Monday. Turns out he had a sinus infection. We started him on antibiotics, which I knew would clear up the problem, but I was so concerned that he would still be feeling sick at the end of the week. It was a big week because my baby brother was getting married! 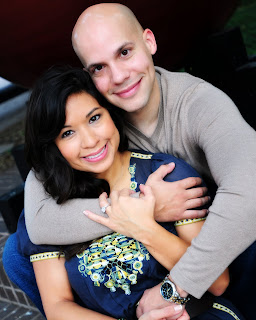 Aren’t they gorgeous? And check out that ring. Baby brother did good!

Anyway, we had family come from Puerto Rico and Ohio to participate in the festivities. One of my cousins arrived first, on Monday night. He stayed with my parents, but came over on Tuesday to visit and to meet Michael. I was a bit stressed that day because Michael was still very sick, and we just noticed that morning that one of his eyes was swollen. We thought maybe he’d hit himself with one of his toys, but weren’t sure if it was something more serious that we needed to be concerned about.

But it was all good because you know what? My cousin is about to graduate from medical school and got here a few days before the wedding so that he could interview for a residency to specialize in pediatrics! Can you believe it? We got our very own house call! My cousin assured me that the swollen eye was most likely due to the infection and should be cleared up with the antibiotics. One of my sisters, who’s a Physician Assistant, also called and instructed me to use the antibiotic drops that we’d been prescribed after Michael was born and had an issue with his eye.

I was so thankful that God had made so many arrangements so far in advance so that Michael could be healthy and happy by the day of the wedding. And I was also thankful that Michael didn’t get sick until after my last day at work so that I could concentrate on him and not have outside distractions. Sometimes the kindness that God shows me and my family is almost too much to bear.

So the week began with some stressing and very little sleep, but I had an invitation for Tuesday night that was a nice reprieve. I’d been invited to a dinner for local bloggers, arranged by Missy and Amy. I was so excited to meet other bloggers, and I can’t even tell you exactly why. After all, I’m a classic introvert and would usually prefer to stick needles in my eyes rather than meet a group of strangers. But maybe I was excited because I love the whole blogging thing and want to start taking it more seriously? Or because I was starved for some interaction with other moms? Or because I needed to escape from the house for a little bit? All valid reasons, for sure.

I almost didn’t go so that I could take care of my little one. But my husband was so sweet to insist that I get out of the house for a while and let him take care of the baby. So I went to the dinner and enjoyed good conversation with some neat ladies. Here’s a picture: 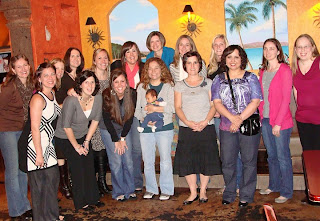 I’m the one in the front that looks like a sumo wrestler.

Kind of makes me look back fondly on these days: 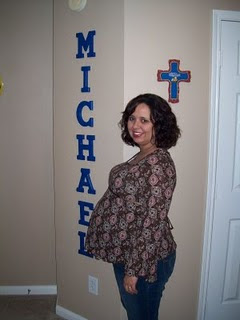 This picture was taken about seven months ago. At least back then I looked pregnant for a reason.

The other ladies, on the other hand, all looked great. Here’s a list of who’s who in the group picture (stolen from Missy’s blog).

After the dinner I went home to relieve my husband from baby duty. By Wednesday, Michael’s temperature was consistently normal, and by Thursday the swelling in his eye had pretty much disappeared. Just in time to party with the family!

We’re about to start a new week…will this be a “normal” week? Is there such a thing?

PrevPreviousMy dream has come true!
Next10 iPhone Apps That I LoveNext