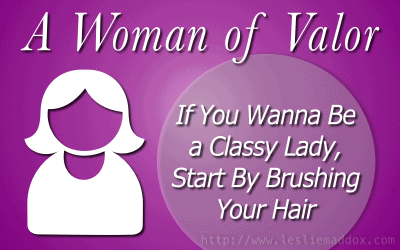 A couple of weeks ago I mentioned that I’d determined that the woman described in Proverbs 31:10-31 is one classy lady. I’d studied the passage after having a rough night with our younger son and then dropping our older son off at preschool with unbrushed hair and wearing a questionable outfit. I read about this classy lady that had all her stuff together and I’m not gonna lie, it stung.

But let me back up and describe how I came to my “classy lady” conclusion.

If you read different translation of the Proverbs 31 passage, you’ll find this woman described in various ways – virtuous, excellent, noble, good, capable. The words used to describe her seemed to me as if they were all over the map, so I looked to the original language for further explanation. I found out that the Hebrew word translated as virtuous, excellent, etc, is chayil. The KJV Old Testament Hebrew Lexicon defines it as “strength, might, efficiency, wealth, army”.

But there’s another aspect to chayil. Chayil is also translated as “riches”, “wealth”, and “substance”.

After seeing that chayil has a meaning of both strength and riches, I understood that the woman described in Proverbs 31 is a woman of great worth and strength as compared to other women. To me, that means that she’s classy.

I’ll pretend that you said yes.

I don’t know about you, but I don’t know many classy people. And I’m certainly no class act. So I needed more information about what it means to be classy. I read the rest of Proverbs 31 and determined that this classy woman prepares herself for what’s to come to the best of her ability. She “smiles at the future” and doesn’t dread it. I think that means that she chooses joy even when she has no idea of what’s to come.

The classy lady dresses well, gives good advice, and is kind to everyone. Basically, she’s the woman every woman wants as her best friend.

This classy lady also makes her husband and children proud. Let me say that again – the people that know her best are proud of her and speak well of her to others. WOW.  Let’s have a moment to think about that.

I’m asking God to change my behavior, speech, dress and image of myself so that I’ll become a semblance of a classy lady. I’d like to make my husband proud. And my boys, too, so that they’ll have a classy ideal of a wife.

And if all that isn’t possible, I’m asking him to at least remind me to brush my hair.

PrevPreviousChurch Spending: Should We Call It Excellence or Wastefulness?
NextLeading a Small Group Bible Study: 5 Ways to Keep Their AttentionNext

2 thoughts on “If You Wanna Be a Classy Lady, Start By Brushing Your Hair”