This was party weekend in the Reyes family.

Actually, considering that there are four kids in my family, and that we’re slowly collecting spouses and children, any get-together can be considered a party. I’m sure the neighbors think so considering all the cars that end up parked outside.

Quick aside: Funny story. A few years ago some neighbors of my parents were having a Christmas party. But a couple of their guests apparently looked at all the cars and thought the party was at the Reyes house. So they just walked right on in, talking and putting down food. My family just stared. When the wife realized their mistake, she ran out of the house. Wouldn’t you just die?!

Alright, back to the present.

Our first party was Saturday afternoon. We had a bridal shower for my sister Julissa, who’s getting married in November. Here’s the bride-to-be. Isn’t she stylin’? 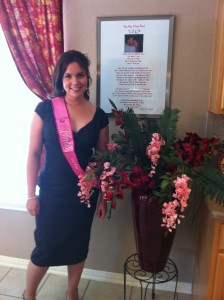 I technically co-hosted the party with my mother, but my mother found her inner party planner and did most of the work. Take a look at all the purty decorations and yummy food. 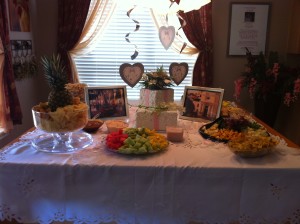 I helped out by making CD’s as favors. My mother ordered the labels from somewhere. 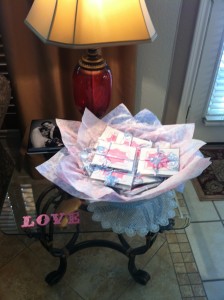 We had a great group of ladies that came over to celebrate with us. Julissa received many wonderful gifts, some of which she apparently did not remember registering for. That’s ok, the same thing happened to me at my baby shower. The mind is a funny thing.

After the shower we had an after-party with the guys, including my little man. My mother-in-law was able to make it to the bridal shower, so Michael was able to spend some time with his grammy. Michael also amused us by imitating the dog… 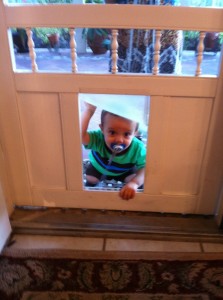 The next day we celebrated my brother and (other) sister’s 30th birthday a couple of weeks early. I can’t believe that my baby brother and sister are going to be 30! 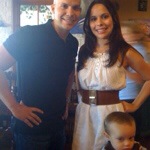 (Notice Michael in the corner pouting for some reason.)

I still think of them as 5-year-olds, Eddie with his Superman PJ’s and Diana with her pigtails. But they’re all grown up, and Eddie and his wife LuAnna are expecting their own little boy in December.

We celebrated at a Cuban restaurant and had some lechon (roast pig). Garrett apparently ended up with the pig’s fanny because he found the tail on his plate. 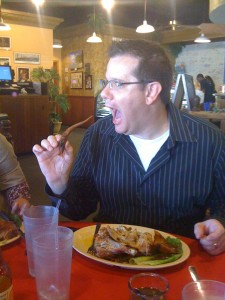 That’s just all kinds of wrong. And a little bit terrifying.

Michael celebrated his first meal at a table with a tablecloth with a game of peekaboo. 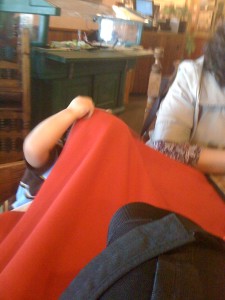 I suppose I’ll need to add “table manners” to the list of things I should teach him in the near future. Right after “potty training” and “not pulling the cat’s tail”.

After the meal, we went home and fell into a food-induced coma. It was like Thanksgiving, except with a pig and not a turkey. And with rice and not stuffing. And flan and not pumpkin pie. But the food coma? IT WAS FREAKISHLY SIMILAR.

Speaking of sleep, it’s time for me to sign out and take a trip to dreamland. God bless and good night.