The First Day of School, Also Known as the Most Wonderful Time of the Year

Today was the first day of school for my boys, and I was so excited! I’m sure that I was the most excited of the three of us, because Michael just wanted to stay home and play video games, and Cruz didn’t know what was going on. But I know that it’ll be good for all of us! 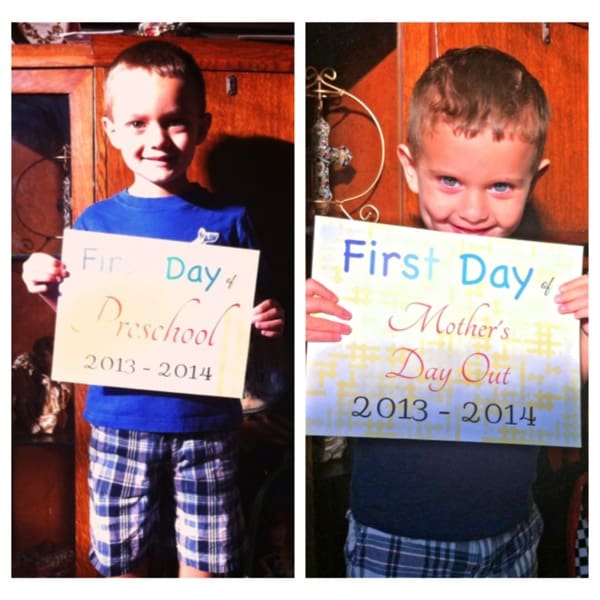 My beautiful boys. Michael just turned 4 and will be in Kindergarten next year! I can’t believe it. It seems like yesterday when he was Cruz’s age and unwilling to stand still for a picture. But now he is so good about posing for me! I only wish I’d taken a picture with better lighting, but I was losing control of two excited boys and needed to be quick about it.

Cruz will be 2 this month and is going to Mother’s Day Out for the first time. We didn’t do Mother’s Day Out with Michael because he likes being home (although he loves preschool once he gets there), but Cruz is our little extroverted baby. If we spend too much time at home he runs to the door and says, “Go! Go!” He just wants to be out and about. Then he cries when we get back home. He just loves exploring new environments. So I knew he’d do well in Mother’s Day Out.

They’re both very different from me as a child. I went to preschool for a short time, and the story I’ve heard is that I was so quiet that the teacher never even heard my voice until a day that she had a hard time getting the class’s attention. So as shy and quiet as I was, I stood up and told off the class for ignoring the teacher when she was trying so hard to be heard. Even then I had a strong sense of right and wrong. That just goes to show you that we are born with our personalities. 🙂

I’m so glad that my boys didn’t inherit my social anxiety. I’ve learned to compensate in many ways, but it was rough when I was a kid. Thankfully, they’re more like their dad when it comes to being around people.

Look how proud Cruz is to hold a sign like Big Brother! Pictures like this one make my heart melt. Cruz adores his big brother and looks up to him so much. 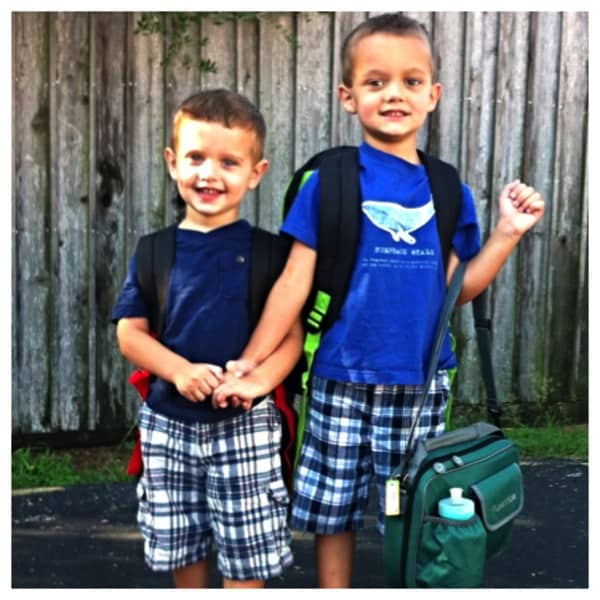 Garrett met us at the school so that he could partake in first-day-of-school awesomeness. We took some pictures in the parking lot because we couldn’t stop with the picture-taking. (Note to self: Natural sunlight gives great pictures!) Cruz adores his big brother, and Michael is very protective of Cruz. He loved that Cruz was going to the same school as him. They’re sporting new backpacks from Abuelita and Michael’s new Planet Box lunch box and carrier. (I’m planning to put up a post later this week about toddler/preschooler lunches and lunch boxes, so stay tuned.)

Garrett expected me to cry after dropping them off (like I did last year), but I held it together because I knew they would be fine. I think it’s so important to really get to know our kids (their personalities, tendencies, likes/dislikes) so that we’ll be able to make good decisions for them for as long as that’s our responsibility. Last year, I didn’t know how Michael would react to preschool. I had an inkling that he liked people and would enjoy it, but there was a lot of uncertainty. That’s why I was so nervous about it. So I’ve spent the last year really studying my kids. There’s a lot I won’t know until they’re older and able to communicate with me better, but I know them well enough now to be able to predict that Michael would be nervous about school at first (so I would have to talk him through a couple of things) and then love it, and that Cruz would pretty much run in and not look back. And that’s what happened.

After dropping off the kids (and making a run for juice for Cruz since I left his sippy cup at home), I came home and went for a walk/jog using a Couch to 5K app. In the interest of full disclosure, I started it over a year ago and am now on week 2. So I had to be very honest with myself today and admit that it is unlikely that I will ever run a 5K. But hey, at least I keep trying, right? Even today when it felt like I was running on the surface of the sun and would quite possibly burst into flame at any moment. I was grateful to have had enough forethought to remove my wedding/engagement rings before going out for my little jaunt, because by the time I was done my fingers were swelled up like sausages. And then there was the matter of the gallons of sweat running down my face. Clearly the ten minutes I’d spent this morning putting on makeup was time well-spent.

After that self-inflicted torture (made bearable by listening to this podcast, which cracked me up at the very end), I celebrated by vacuuming/mopping without my “little helpers” slowing me down, and then washed my hair (which is increasingly arduous because it is ridiculously long now). I then ate a salad for lunch while chatting with my husband without being interrupted once. And I edited pictures until it was time to pick up my boys. I was so happy to see them and to see that they were content and in great moods. I was in a pretty good mood, and we had a quiet, pleasant afternoon and evening – even when Michael begged Cruz to allow me to change his diaper because, as Michael told Cruz, “You don’t smell good!”

Isn’t that a pleasant mental picture?

Now I plan to play Candy Crush until I run out of lives, so I have ten minutes of fun ahead of me before crashing. Good night!

1 thought on “The First Day of School, Also Known as the Most Wonderful Time of the Year”