On this page... hide
1 Books I’m Reading (or Read)
2 Movies I’ve Watched
3 TV I’ve Watched
4 Stuff I’ve Listened To
5 Food I’ve Eaten
6 Pictures I (or My Husband) Have Taken
7 In the Blogosphere
8 On Geek Mama
9 What I’m Looking Forward to Next Month
9.1 You may also be interested in...

Smalltopia: A practical guide to working for yourself (ebook) by Tammy Strobel – It was a good overview, but I was looking for more in-depth information about starting your own business.

Bossypants (Audiobook) by Tina Fey – There really needs to be a rating system for books because I would give this one an R. I did find it hilarious, especially as a fan of 30 Rock since I could see she wrote her own life experiences into the show. My favorite part was her description of her father. You can tell she respects him and thinks he is just plain cool, and how many people can say that about their dads?

Sparkly Green Earrings: Catching the Light at Every Turn by Melanie Shankle – Laugh-out-loud funny. Read it.

The Hunger Games by Suzanne Collins – I loved this book. It had a great story and was also well-written. I’m looking forward to reading the sequel.

Quiet: The Power of Introverts in a World That Can’t Stop Talking (Audiobook) by Susan Cain – I started this book forever ago and am now listening to the audiobook. It is so interesting. And validating. Read it if you’re an introvert or love one.

Traveling Mercies: Some Thoughts on Faith by Anne Lamott – This is another book that I started forever ago and have picked up again recently. If I had to put a rating on it, it would probably be a PG-13 or R. She’s no Beth Moore, so don’t give it to your kid to read. But she’s one of the best writers I’ve ever read, and her point of view is valid.

I watched the movie adaptation of The Hunger Games and was pretty disappointed. I felt that the book presented a huge disparity between the lives of the very poor (starvation and just making it through the day) and the wealthy (slick and shiny and lots of technology), but the movie didn’t do that very well. Disappointed.

We’re still watching Revenge, and it has taken some interesting turns.

We’ve watched a couple of episodes of The Bachelor recently, even though we haven’t been keeping up with it this season. It’s always a good reminder to be thankful for my husband.

We’ve also seen a few episodes of The Biggest Loser. Wouldn’t it be awesome to lose 10 pounds in one week? But how tired and sore would I be from all the exercise?

We watched Downton Abbey up until the bitter end. I wrote posts about my thoughts on a couple of the last episodes (here and here), but I couldn’t write a blog post about the last episode because it was just too much. For the record, I knew what was coming because I’d seen a spoiler online. But I’m still very irritated by the whole thing. I want to say that I won’t watch the next season, but I know I will.

I’ve listened to a couple of audiobooks (see above) and have loved it. I first downloaded an audiobook because I thought it would be a good way to keep me moving while jogging, but ended up loving it for a road trip and just running errands in the car. I also discovered that if you buy an ebook from Amazon and there’s an audiobook available, you can buy the audiobook too (at a discounted price) from Audible and they’ll stay synced up with each other. So if I’m listening to the audiobook in the car and then go home and start reading on my Kindle, the Kindle book will sync with the audiobook and take me to my place. I love that feature so much I want to take it out to dinner.

I really need to remember to take pictures because I wish I had a picture of what I’m about to tell you. While in Dallas, my sister took me to a restaurant called Baboush, which served incredible Mediterranean/Lebanese food. I had no idea what to order, so since Diana had been before she selected a few items. The menu items were like tapas, which means that you get small platters that you eat family style. I especially liked the shawarma (was it chicken? lamb? ??) with this amazing hummus. So so good. I also had some sort of pineapple cocktail which was really good. I really do need to start taking pictures and remembering the names of things. It would make blog posts like this one so much more interesting and informative, don’t you think?

Pictures I (or My Husband) Have Taken 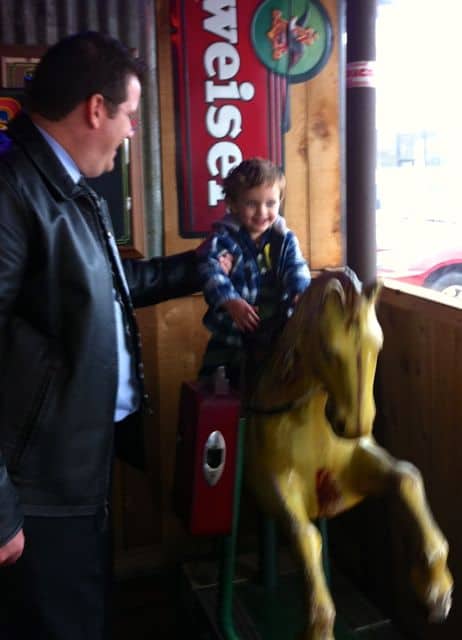 This was Cruz’s first ride on a mechanical horse (with daddy keeping him safe), and it blew his mind. This picture is pretty blurry, but I’m glad that I captured that deliriously happy grin. Love that boy. 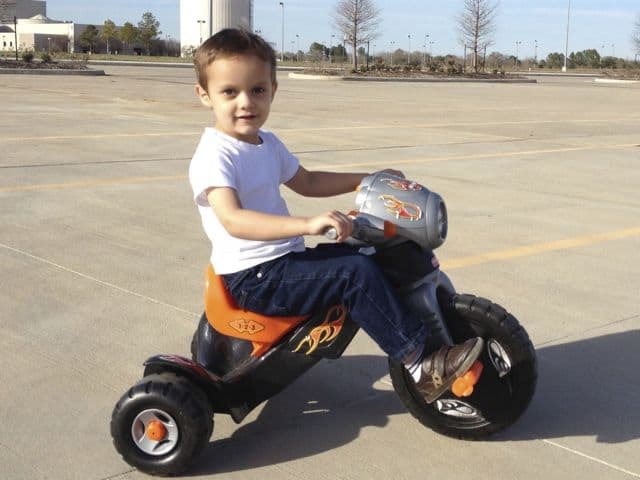 Garrett has been taking Michael to this big empty parking lot to ride around safely. Michael LOVES it. He reminds me of James Dean here. 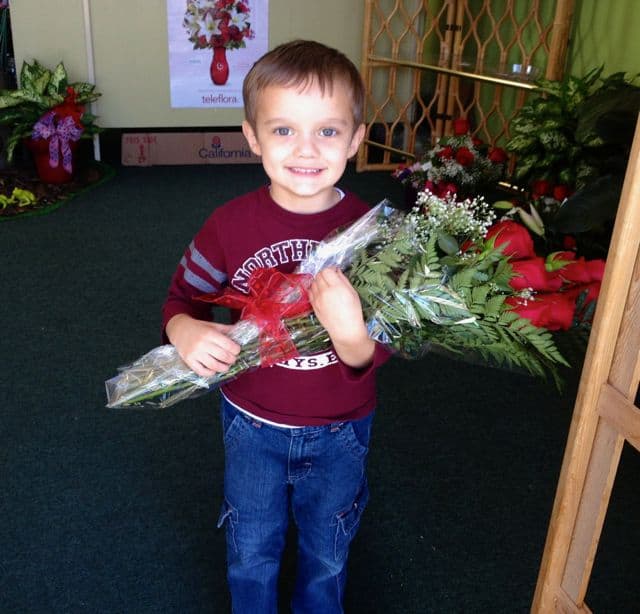 I love this picture so much. Garrett took Michael with him to pick up roses for me for Valentine’s Day. Michael was so proud to be holding the roses. My handsome boy. I can’t believe that he’ll be four in July! 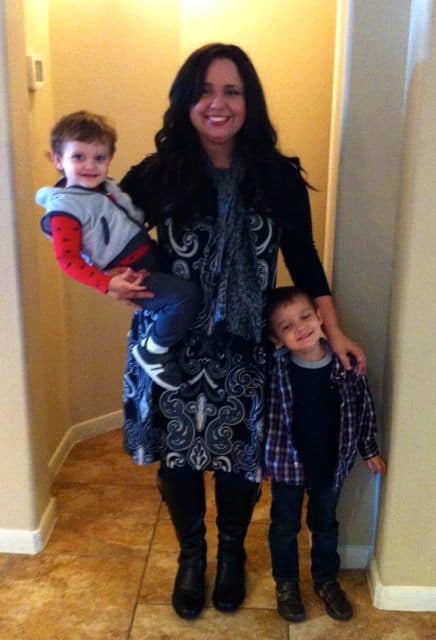 I’m trying to remember to get my picture taken with the boys when I’m actually dressed with makeup on. That pretty much happens only on Sundays, so if I can only get dressed and ready before we have to run out the door… Garrett took several pictures on this particular day, and there wasn’t a single picture where we all looked good. Michael is giving a goofy smile here, but that’s pretty much his approach to most pictures these days, so I’m glad to have it documented. Also, aren’t I short?! 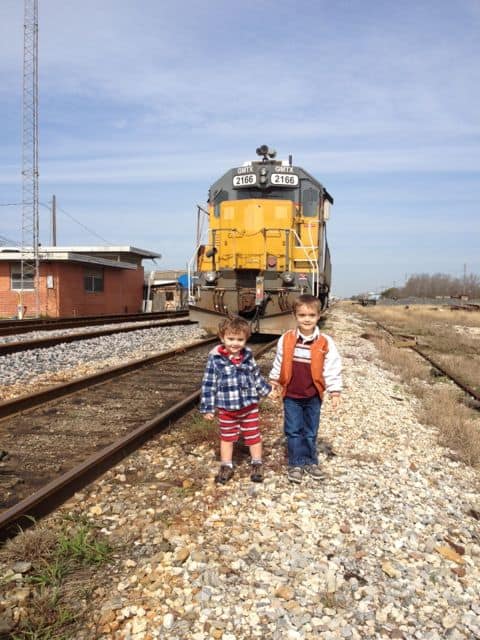 Garrett took this picture while I was in Dallas last weekend. Michael went through a period when he loved trains, so Garrett took a picture of him a while back near this train that sits near his office. This weekend he got the both of them. Cruz is so proud to be standing next to his big brother. Also, Cruz is not actually wearing shorts and a jacket. His pant legs are just hiked up from sitting in the carseat. Although when I first saw this picture I was terrified that my 17-month-old had already outgrown his 24-month clothes.

I enjoyed this post about why Melanie wrote her book, and the video made me cry. PMS may or may not have been involved.

This post about chasing God’s calling with passion spoke to me. Like many moms, I’m in a season of life when there’s not much adventure-seeking going on. And I prefer it that way because raising active boys is an adventure in and of itself. But sometimes I wonder if life will be more, well, interesting one day.

I wrote a review post about the Thirty-One tote that I ordered and how I’m using it. I took it to the .MOM conference instead of a purse and was so glad I did. It got a little heavy with my books and iPad, but it was nice to be able to throw everything in there and even have an easy way to carry a drink.

I’m trying to write more posts about my day-to-day experiences, both for my family and myself. There are a couple of posts here and here that I’ll look back on one day and smile.

I’m still occasionally writing about what I’m learning about the excellent woman described in Proverbs 31:10-31.

I posted more tips about how to lead a small group Bible study. I hope they’re helpful!

I reviewed a book that I didn’t fully enjoy. But the experience of writing the review was good for me.

What I’m Looking Forward to Next Month

We’re going to the wedding of an old friend this weekend. We got to know each other carpooling to Beth Moore’s Tuesday night Bible studies at Houston’s First Baptist Church, and I remember those Tuesday nights as some of the best times of my single life. We talked a lot about singleness, and I’m so happy to be going to her wedding.

I’m planning to visit a local farmer’s market for some fresh produce. I’m really looking forward to tomatoes being in season because tomato sandwiches? YUMMY!

We’re considering taking the kids to a local farm to pick strawberries, but I don’t know about taking Cruz at his age (17 months). I think Michael will be all about picking strawberries, but Cruz is another story altogether. He’s at that age that he’s just so excited about everything! Is it foolish to try to take him now? I want it to be a good time for Michael without getting stressed out over managing Cruz.

I’m linking up with Hopeful Leigh.

PrevPreviousMy 5 Favorite Things About the .MOM Conference
NextA Day in the Life – Edition “We All Need Claritin”Next