Get Access to the Freebies!
Home 9 Livin' la Vida Geeky 9 A Day in the Life – Just Plain Sick and Tired

A Day in the Life – Just Plain Sick and Tired

One of the things I love about mom blogs is getting a peak into another family’s life. It encourages me to know that the struggles I have as a mom are common to all mothers. I also love reading about the fun stuff, because sharing joys as well as struggles is unifying.

There are a few blogs that I feel do this sharing-life-on-a-blog thing well (like BooMama, Big Mama, Kelly’s Korner). I wish I could do the same thing because it would be an incredible record for my family, but the truth is my life is just too boring to write about every day. I don’t have friends that I go out with, no parties or socials, we don’t even have a church home to be involved in (after living here for almost two years – aaagh!). Most days are pretty much the same and consist of dirty diapers, dishes, discipline issues…really stellar writing material, right?

Still, I think that in ten or twenty years posts about an average day in our family will be very interesting to me at least. As a matter of fact, I just read the Day in the Life post I wrote almost two years ago when I was six months pregnant with my youngest and loved it, so yeah, I’m definitely doing this. Prepare to be riveted.

I woke up this morning at about 7:20 am all on my own, without a child screaming for me. This is unusual for me and I was tempted to stay in bed, but it’s a school day for Michael (he’s 3 and in preschool), so I knew I’d better get moving. Garrett kissed me good-bye on his way out to work and I got up, had my morning ablutions (as they would say on Downton Abbey…or was that The Big Bang Theory?), and got dressed. Somewhere in all that Michael woke up and came into our room.

Cruz still wasn’t awake (which was SHOCKING), so I took the opportunity to get Michael his breakfast (heated a tortilla in the microwave, spread blueberry cream cheese on it, and rolled it up…with watered-down apple juice…don’t judge me). Right around this time Cruz woke up, so I got him out of his PJ’s, changed his diaper, tried to brush his teeth (the effectiveness of that is really touch and go), and strapped him into his booster seat. Cruz got watered-down apple juice, dry cereal, and a cut up banana for breakfast.

I had a bowl of Kashi with half a cup of coffee, then it was time to get the kids dressed. I send Michael off to the bathroom to go potty and gather his clothes for the day. I get him dressed in the living room while Cruz is still in his booster seat because I can wrestle only one child at a time. Then I have the treat of changing Cruz’s diaper again (already!). This is always unpleasant for more than the obvious reasons – Cruz is into this thing now where he tries to kick me in the face while I have him on the changing pad. And he’s a big kid (30 lbs at 16 months old), so his kicks hurt.

Nevertheless, I prevail and get him changed and into clothes for the day. Here’s where a picture of my two boys would be awesome, but I didn’t think to take pictures until the end of the day, even though I knew I was going to write this post. #bloggerfail

The mad dash for the door begins. It’s about 8:40, so I’m running late and still have to put on makeup in the car. Yes, I wait until the kids are strapped into their carseats and then put minimal makeup on using that itty bitty mirror. Sometimes life is all about choosing your battles.

It’s actually pretty cold, so I wrangle the kids into their jackets. I carry Cruz to the car, which he doesn’t like because he thinks he’s a big boy now and wants to walk holding my hand. But the yard is muddy right in front of the car door, so I do my best to carry a struggling 30 lb toddler to the car without dropping him in the mud. We barely make it.

I get the kids in the car, put some makeup on (I forgot to put my contacts on and am still in my glasses – oops), and we’re off. I’m running late, and wouldn’t you know it there’s an issue on the interstate and get held up in traffic for a few minutes. On top of that, Michael has become very chatty and I’m starting to realize that I’m not feeling very well. I make it to the school a few minutes after 9 (late!).

After dropping off Michael, Cruz and I go through the McDonald’s drive-thru for a caramel mocha, and then I’m off to find an EZ tag store to pick up a sticker for Garrett’s new (to us) car. I’m driving that car to Dallas next week for .MOM, so it’ll be easier on me if I don’t have to stop at toll booths in Dallas. I forgot to plug the address into Navigon, but I think I can figure it out. I’m wrong and waste time, finally pulling over to look it up on my iPhone. We finally make it there, get my sticker, and head to the pharmacy to pick up a prescription.

We make it home sometime after 10am and I let Cruz loose to play. Here’s where I usually try to do a little Bible study, but I’m feeling worse and worse and my ability to think linearly is affected. So I sit on the couch with my iPad and google churches, check my mail, and generally waste time (when I’m not entertaining Cruz, fixing a toy, getting him juice, etc) until it’s time to pick up Michael. I mean to change Cruz’s diaper before we leave, but don’t give myself enough time and we’re just coming right back anyway.

I pick up Michael and he immediately informs me that he wants doughnuts. He’s obsessed with doughnuts. I tell him, “Not today,” to which he says ok and then tells me that he doesn’t want to go home. I don’t blame him, I get stir crazy at home sometimes, too.

While I’m thinking about all this, Michael asks to see Daddy’s office, so I think what the heck. Garrett’s office is close by, so I swing by and ask him if he wants to join us for lunch. He agrees, but then I remember that Cruz needs a diaper change and I didn’t bring the diaper bag, so we go to the Walgreens to get supplies and change him in the front seat. When Garrett pulls Cruz out of his car seat, I see that Cruz’s diaper leaked and we don’t have a change of clothes. AWESOME.

But we carry on and go to a small Italian restaurant nearby. Chaos ensues in the form of tantrums, spilled drinks, thrown flatware…Garrett and I walk out of there with a mild case of PTSD. I almost leave my debit card behind…thank goodness for honest employees! We drop off Garrett and I head home with the kids, wondering how I’m going to get through the day.

We get home and I get Cruz out of his dirty clothes and change him again. I pull the mattress topper that he sleeps on (Cruz started trying to climb out of his crib, so we moved him to a toddler bed, but he kept falling out) to the living room, planning an afternoon movie for the kids with the lights off, hoping that they’ll take a little nap and I’ll get a break. We get pillows and a blanket and settle in, and there’s a short period of peace. Which I’m so thankful for because now I’m feeling dizzy and have started wheezing.

But the kids eventually go back to jumping around and wrestling, with Cruz getting into everything and climbing everything and generally trying his best to hurt himself. And me, because Cruz at some point accidentally kicks my face (it’s a miracle my glasses aren’t broken) and Michael accidentally head-butts me. It’s like the Hunger Games in reverse, with me fighting to keep the kids alive and injury free. I’m so exhausted and feeling so bad that there are several times that I just want to stop and cry. But I don’t have the energy for it (much like those of you that have managed to read this far).

I start dinner (baked breaded chicken which took forever because the chicken wasn’t completely defrosted and I suspect that the recipe has the wrong oven temperature) and take a couple of puffs on my inhaler. Garrett gets home at about 5:20 and gets the kids dinner because I can barely stand. I remember that Michael needs to take Valentine’s cards for his schoolmates the next day, so Garrett sits with him to help him sign his name. It’s a sweet moment, so I finally remember to take a picture.

We’re surprised that Michael does really well with his name! He needed just a little bit of help. My baby is growing up. 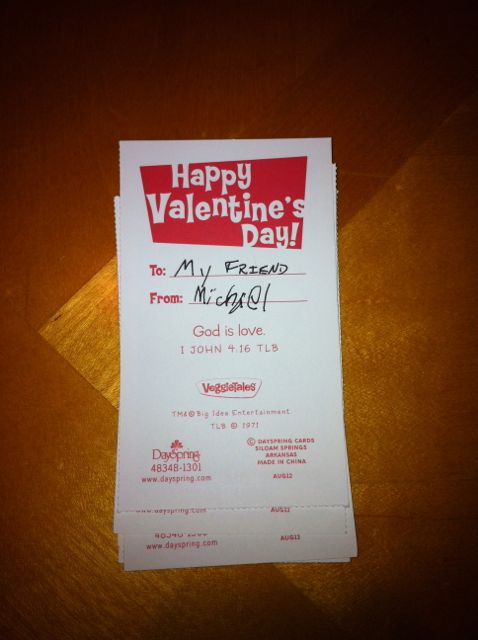 Garrett gives the kids their baths and it’s almost time for bed. Michael spends the time before bed playing a Cat in the Hat game on his Nabi.

Michael tolerated the picture-taking while Cruz photo bombed his brother.

I tried to get a cute picture of Cruz, and here’s what I ended up with. 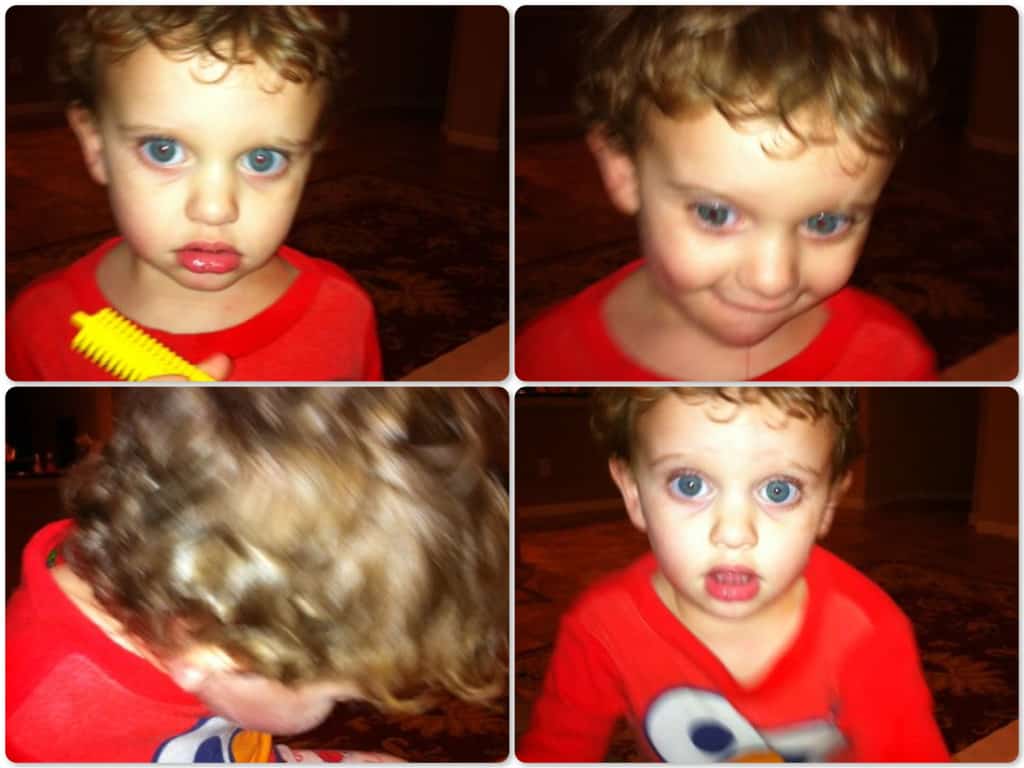 He wasn’t in the mood for pictures.

I love my boys so much. They make me laugh (especially Michael – he’s really getting funny) and I just adore to watch them being themselves. They’re growing up so fast, and that makes me a little sad. This is a really difficult parenting season for us, but I know that one day I’ll look at these pictures of my baby boys where they’re at an age when they still like to sit in Mommy’s lap, and I’ll miss this age so much. But I’m also looking forward to them being able to communicate with me more, because I just can’t wait to hear how their minds work.

After putting the kids in bed, Garrett and I watched Revenge on Hulu, talked a little, and enjoyed some Words with Friends. And now I’m ready for bed.

If you’ve read this far, God bless you. Know that you’re my favorite.