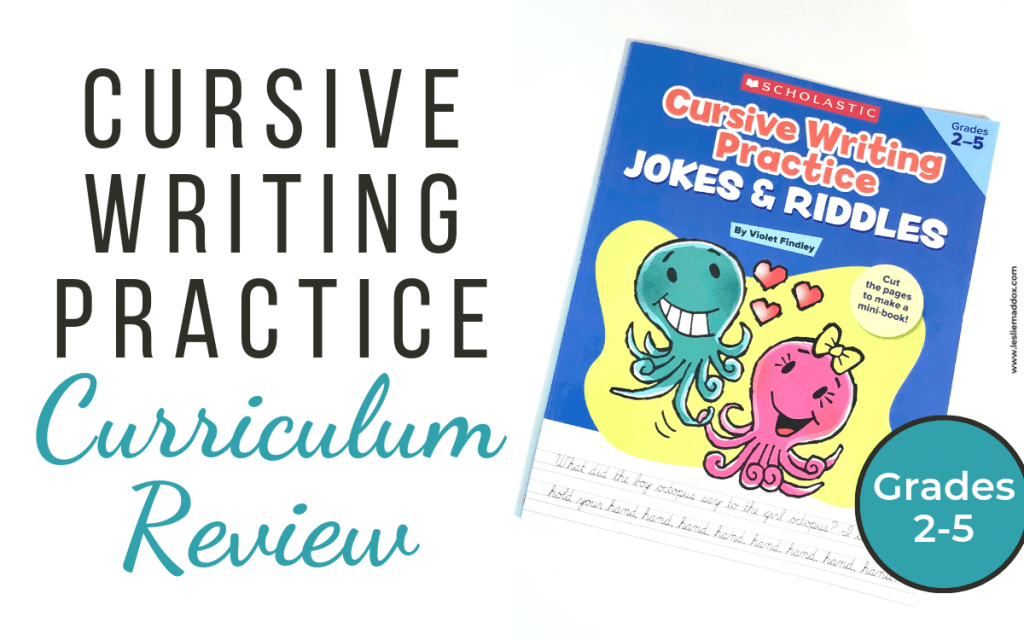 I’m using Cursive Writing Practice: Jokes & Riddles, published by Scholastic, with my soon-to-be fifth grader. I chose it for some fun handwriting practice during the summer, but we may continue with it next school year.

Cursive Writing Practice: Jokes & Riddles takes a novel approach to handwriting practice. Rather than practicing handwriting with dry source material, students write jokes and riddles in cursive. Since I have three boys that love a good joke, I knew that my oldest would love sharing new jokes with his brothers.

How It’s Set Up

Cursive Writing Practice: Jokes & Riddles has 42 practice pages. The first two practice pages give the student an opportunity to practice writing the alphabet, first uppercase then lowercase letters. There isn’t any instruction about how to form the letters, other than arrows to serve as a reminder. So this workbook assumes that the student has learned how to write in cursive already and just needs some practice.

Since there can be differences in how cursive letters are formed (ex, the letters F and T), it’s important to note if letter formation reflects what the student has learned in the past. Since my son learned a different way to form some letters, I gave him the option to continue writing the way he learned, or try out the new letter formations. He chose to stick with what he learned in the past.

All practice pages other than the alphabet pages have the same setup:

A blank page at the end of the workbook allows the student to add his own jokes/riddles.

Students have the option to create their own joke booklet when the workbook is completed (instructions at the front of the book). A dashed line between the top and bottom portions of each page shows where to cut.

You may want to decide how you want to schedule Cursive Writing Practice: Jokes & Riddles. I have my son use it about four times a week. He writes the practice words on a practice page one day, and then writes out the joke the next day. Other options for using this workbook include:

How much time a student spends on this will depend on how you use it. The way we use it, it takes my son less than 10 minutes a day.

To whom would I recommend Cursive Writing Practice: Jokes & Riddles?

(Based on Learning Preferences and Three D’s I describe in earlier posts.)

I would NOT recommend to…

Students that need instruction on how to form cursive letters.

The Last Thing You Need to Know about Cursive Writing Practice: Jokes & Riddles

Cursive Writing Practice: Jokes & Riddles is a great way to inject some fun into what is normally a tedious and boring subject.