This past weekend was unusual for me in that I actually got out of the house without the children. I put on non-mommy clothes and applied makeup at my vanity rather than in the car. I didn’t even know myself.

But let me back up. The plan for Saturday was to go to Big Mama‘s book signing and do a little shopping. The book signing was at 1pm and about an hour away, so I planned to spend the morning washing, drying and curling my hair, taking my time applying makeup, and having a bit of lunch before heading out the door by noon. Yes, I’m high maintenance when I’m not channeling my inner homeless person.

Well, you know what they say about the best laid plans.

I was worried about Michael because he’s been coughing a lot at night, and I thought he might have the plague that Garrett, Cruz, and I have taken turns succumbing to. I’d actually waited a couple of weeks before taking Cruz to the doctor because he didn’t have a fever and played happily during the day, only to find out that both ears were badly infected. #momfail

So I thought that Michael should be checked out sooner than later. Friday wasn’t an option because I was only on the second day of my antibiotics and knew I couldn’t handle taking both kids to the pediatrician on my own. Our experiences at the pediatrician’s office are touch and go even when I’m feeling my best, what with the Rolling Stool of Death, the Exam Table of Crinkly Paper and Hidden Compartments, and the Inconveniently Child-Accessible Monitor and Keyboard. If I’d spent twenty minutes in there trying to keep two toddlers from hurting themselves, breaking something expensive, or running out the door, I would have been the one needing medical attention.

So I asked Garrett to take Michael to the Walgreens’ Take Care Clinic on Saturday. I’d hoped that Garrett would take the kids in the afternoon while I was off on my afternoon of freedom, because apparently I had no sympathy for the chaos he would have to endure with two toddlers in a drug store with CANDY! and TOYS! and displays to knock down! and aisles to run through! I’m thoughtful like that.

But Garrett knows me all too well and got ready to take Michael to the clinic before I was even out of bed. Mornings are my Kryptonite and render me unable to function in polite or even impolite society. My pre-caffeneneited self didn’t even have the mental wherewithal to object. Well played, Garrett, well played.

The good news was that Michael was fine and needed only cough medicine. The bad news was that I was way behind on my beautification process. I wasn’t out the door until after noon, without lunch. I tried to put on my happy face, telling myself here’s my opportunity to relax and listen to music. But Houston traffic soon gave me a reality check by re-introducing me to stop-and-go traffic. I spent hours on the road that day contemplating love, joy, and the meaning of life. I concluded that it’s all meaningless when you’re trapped in your car alone.

I did finally make it to the book signing and met the fabulous Melanie and darling Caroline. Here’s where a picture would be lovely, but I hate to bother people and there was a line and what if I hated the picture, so I chickened out in asking for a snapshot. All I have to share with you about the event was that Melanie was perfectly sweet and seemed sincerely interested in having a little chat with each person, even though she had to have been tired and on a bit of overload.

I walked around the mall for a while afterward and all I bought was a couple of pairs of jeans for Michael at Old Navy. Two for $22. Isn’t that riveting?

I also realized that I was famished and ate Chinese food in the food court. I’d tell you exactly what I ordered and how many grains of rice I left on my plate, but I fear you’d faint from the excitement of those revelations.

After another long drive in Houston traffic back to my part of town (made longer by my wrong turns, even though I was using Navigon, sheesh), I met Garrett and the kids at Rudy’s. You know where you might not want to go with toddlers? RUDY’S. Garrett had to leave the line he’d been standing in for a trip to the restroom with Michael, after which Michael walked around our table begging for ice cream or candy from the machine or just about anything he saw while I tried to keep Cruz from pushing over his high chair. Once the food came, we did all we could to keep the food on the table and not on the floor (thanks to the sheets of paper Rudy provides instead of plates), to no avail since Cruz managed to poke a hole through the styrofoam cup with his straw, spilling lemonade all over me and my new boots.

We left Rudy’s determined not to come back, although I fear that’s a promise I can’t keep because I am helpless to resist their extra-moist brisket.

During that stressful dinner I heard all about their afternoon at the park with PawPaw. 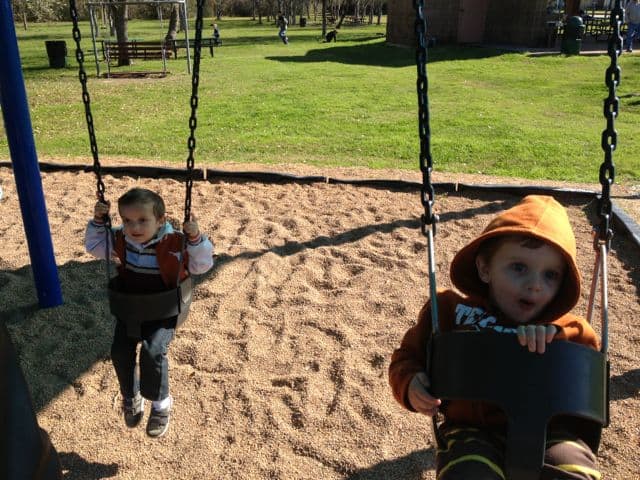 I love that they had fun. 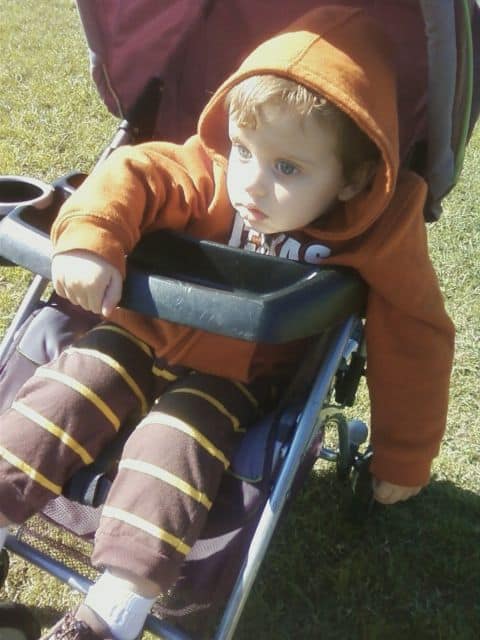 I just love those boys.

I finished off the day by digging into Sparkly Green Earrings. I really did laugh out loud several times. It’s reminding me that we’re all trying to figure out this mom thing as we go, and as tough as it can be, humor helps. A lot. That’s why I write these long-winded posts describing a tough day – to help me reset my view of the day by examining it with humor.

And getting out of the house sometimes – without kids – helps, too.