So it’s officially been over a month and a half since our last post. Whatever happened to my intentions of keeping family and friends updated on our happenings through this little blog? Especially now, when we’re expecting our first little one?

Well, you know what they say about the best of intentions.

But I’ll excuse myself by saying that I have been dealing with morning sickness from hell. You know how I said in the last post that my morning sickness was lessening at 11 weeks? Well, it was like I triple-dared the gods of all that is unholy to prove me wrong. Soon after writing those daring words, my morning sickness came back with a vengeance.

And when I say it came back with a vengeance, I mean food became my enemy. I had little appetite for most of the day, and when I did eat, I ate knowing that it would only be a matter of time before I would have to run my pregnant body to the bathroom (praying that I wouldn’t trip over a cat or dog) to vomit at least half of my stomach contents.

(Here’s where my mother will stop her reading to call me and demand that I do something about the cats and dog. Mom, I eagerly await your call.)

(And here’s where my sweet husband silently curses Eve and that dastardly snake in the Garden of Eden for the pain and suffering we’re both dealing with in this pregnancy. Sweetie, I really do appreciate all you do for me. So much so that there’s tortilla soup in the crock pot for your enjoyment tonight. Nothing but the best crock pot meals for you, baby. The sour cream and cheese are in the fridge.)

At least once a week someone would tell me, “Oh, it’ll get better soon.”

Dear readers, if you want me to hang onto my sanity, please do not tell me, “It’ll get better soon.”

So tomorrow I’ll be fully at 17 weeks. I won’t tell you that the nausea and vomiting seems to have improved over the last few days because I now know better than to tempt fate.

Here’s where a picture of my 17 week belly would be appropriate, but I haven’t gotten up the nerve to take a picture yet.

“Why?” you ask. “A pregnant body is a beautiful thing.”

I’ll tell you why. Because my 17 week belly looks more like a 25 week belly. Y’all, it’s embarrassing. You see, I wasn’t skinny when I got pregnant. So by the time I took the pregnancy test, I already looked like I was a couple of months along. Add to that fact my short stature and even shorter torso, and you have a recipe for a big ol’ belly. No one has said anything overtly rude, at least not that I can prove. (As I was getting a pedicure this weekend, my nail technician was talking in Vietnamese to another nail tech. They stopped to ask me how far along I was, then continued their conversation in Vietnamese. I can’t prove it, but I just know that they were saying, “She so big fo’ 4 months.”) But I’m still paranoid.

I will eventually take pictures since my mother already bought me a Belly Book and has convinced me that I will want those pictures one day. But I can’t promise that they will ever appear on this blog since I can’t bear the thought that readers of the World Wide Web will also be saying, “She so big.” Vanity, thy name is Leslie.

So instead of a picture of my preggo belly, here’s a picture of our precious and much-loved little one at 11 weeks. We have our next ultrasound on Feb 17, when I’ll be 20 weeks. We can’t wait to find out if I’m carrying Isabella Anne or Michael Thomas! 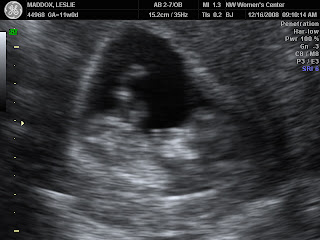 PrevPreviousThe Most Precious Heartbeat
NextPregnancy: From Gas Bubbles to Little Hands and FeetNext